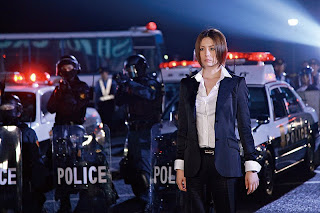 Director - Hidetomo Matsuda
Rating - 2/5
A by the numbers film based on characters from Japanese drama, The Negotiator.
The Negotiator, or to give it its full Japanese title The Negotiator – The Movie, Time Limit 10,000m Head Games, is a completely implausible, testosterone laden, mildly entertaining genre romp. It is the film version of the popular Japanese drama, and fans are unlikely to be disappointed as there is a distinctly TV special vibe to the proceedings. Those not acquainted with the show need not worry as the story keeps within the confines of the two hour running time. The movie itself twists and turns far more than is necessary and gets more than a little carried away. You don’t just need to suspend your disbelief; you have to forget you ever had any in the first place.

Three robbers are in a huge car chase after stealing 250 million yen. They escape into a shopping mall and begin taking hostages. The leader Mido is one of those smooth, charming, and charismatic criminals that seem to only exist in films. He waxes lyrical about social injustice, bizarrely citing Mark Chapman, John Lennon’s killer. He starts negotiations with our heroine, Reiko Usagi of SIT (The Special Investigation Team), but before she gets anywhere communications are terminated and the SWAT team are invading. When the criminals blow up the entrance, one uses the confusion to escape, and Mido is taken into custody. Days later as Usagi is preparing to fly off on holiday, she spots one of the hostages who was acting strangely boarding a flight at the airport. Suspecting that there is something bigger afoot’ she follows him onto the plane. She is proved right as the hostage and his brother have become tangled up in the criminals’ master plan.

The ensemble cast’s ability varies immensely, at times exposing the TV roots behind the film. Usagi (Ryoko Yonekura) is a pretty stereotypical rebel with a cause character, a strong woman in a man’s world. Yonekura is very earnest throughout but she just doesn’t have much to work with. Her fellow SIT colleagues. too, all give perfectly serviceable performances but don’t impress immensely. The bad guys fare a little better. Grand villain Mido, played by Masahiko Tsugawa, is slightly hammy but very entertaining. He enunciates all his words in a way that makes him seem like a Disney villain who’s landed in the real world, and it is a shame he doesn't have more screen time. Takashi Sorimachi as the cold criminal and hijacker deserves a mention as well. Overall though, a lot of the script feels like it's been written with caps lock left on, and the characters are under-developed and two dimensional.

The film has some monumental plot holes that are a bit distracting. Somehow the hijackers have managed to get a fairly decent arsenal of weaponry onboard. So much for the post 9/11 world that everyone has been going on about for the last decade. Thrillers have to jump left and right but this veers from totally predictable to completely ridiculous. It all winds up feeling a bit absurd. Perhaps you shouldn’t pick too many holes in a film with no delusions of grandeur, but when they are this glaringly obvious it does make all the overly serious acting seem a bit silly. If you do manage to make peace with it all. there is a certain charm to its callous attitude to reality.

The Negotiator is never less than watchable but its by-the-numbers direction and acting and its clichéd storyline are more suited to the confines of a television than the big screen. It hurtles along at a decent pace and is generally well made, but we’ve seen everything here before and there’s nothing that really stands out. Those who follow the TV series will enjoy seeing the extra money in the budget being splashed around, explosions, car chases, and stunts punctuate the movie. I never found myself bored but there are far better examples of this kind of thing out there.