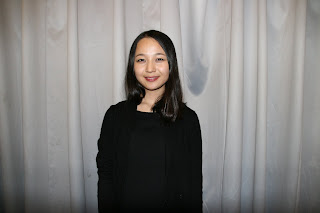 Kim Kkot-Bi first came to international attention with her role in Jealousy Is My Middle Name, which won awards at the Rotterdam festival in the early noughties. She has since been in the acclaimed Breathless by Yank Ik-Joon. She arrived at Yubari with two very different films to promote: Ashamed, a sensual lesbian love story, in which she stars as a pick-pocket who falls in love with with Hyo-Jin Kim's Youn after fate drags them together, and, Be My Guest, a violent, black comedy revenge film. Film in Japan caught up with her at the bottom of the Yubari ski slopes.

FIJ - How are you enjoying Yubari?

KK - As I expected it's snowing, such a beautiful city.

FIJ - Are you going to do any skiing or snowboarding?

FIJ - So let's talk a bit about yourself, how did you get into acting?

FIJ - What was the first film you made?

FIJ - I've seen the two films you were in here, Ashamed and Be My Guest. Let's start with Ashamed, could you explain the story to us?

KK - Ashamed is a story about girls, it's all about girls. It's a story of growing up, and about the love between girls. It's not only about the love between girls, but the sympathy, their lives, and maturing. Various stories are in it as a whole.
FIJ - Your co-star Hyo-Jin Kim are at the centre of the film. What was it like working with Hyo-Jin Kim?
KK - It was a really great experience. Before I met her, I didn't know she was such a great person, I don't mean to say I'd never heard of her but I didn't know that, and during working with her it was just great, I admire her a lot.

FIH - You two had such a natural chemistry, was it like that straight away, or did you get to know each other and it developed?
KK - In acting? Yeah we did some rehearsals before shooting...and we are not, err....we are not really...lesbians! So we needed to find out about this kind of love. We watched some lesbian films and TV shows.
FIJ - For example?
KK - L Word and stuff. Anyway, eventually we found it wasn't working, we weren't really focused on lesbian relations, more on individual characters. Also, it's not so different from straight relationships. I acted , as if I loved someone, not specially a woman. I treated it the same as any straight relationship and I think that was a good choice and it works
FIJ - Yeah, The love scenes were really passionate was that difficult to do, was it a challenge?
KK - [laughter] At first, it was a challenge. In the first place, before I joined this film. yeah, I was a bit nervous about the love scenes because I'd never done any before. So it was kind of a challenge for me, of course. I was over-thinking, worrying about it, but after I made up my mind, I'd decided. Actually, the lesbian scenes weren't too hard, but in the film I do a scene with a boy as well, with a guy it was harder. With a girl it was more natural.

FIJ - The two characters are quite different, one is a dreamer, and the other is more down earth. Which one are you more like yourself?
KK - Myself? It's quite a complicated question. I don't know, basically, I think that everyone has every side inside them. I think i have a bit of all the characters inside me. I have a dreamer, and a bit more serious side. I think my performance came from inside, from my feelings.
FIJ - What was your favourite scene from the film?
KK - In acting the last scene when I was crawling in the mud, that was very hard. But, just before that, when I leave Youn [Hyo-Jin Kim] and I hear her shouting, and I run and scream, that point was very strong for me. I'm a little bit sad that we couldn't catch the strength of that moment when we were shooting, it's a bit of a shame. That moment was the strongest moment during shooting, and the most memorable.
FIJ - That bit at the end, where there is that distance between you two, and you're running but your character isn't moving. How did you film that?
KK - It was very very difficult to shoot, I was running on a machine, so we combined them with a blue screen. During the shooting my heel broke, I fell and nearly injured myself pretty bad. It was difficult, hard, and also dangerous! What did you think about that scene, isn't it awkward?
FIJ -It's a nice image, it makes it clear there's this distance between you.
KK - I don't know, I felt the audience can see that the audience can see that I'm running on a running machine. I was worried about that.
FIJ - I guess because it's the only part of the film where you do that, where there's that camera trickery, it just adds a bit of emphasis.
KK - Ah, No, also where there is that gravity-free shot!
FIJ - Oh yeah! Please tell us?
KK - It was also difficult! I was acting with a wire, wire action! When I read the script first, I thought oh! Maybe I could experience a gravity-free zone, but no it was wires.
FIJ - Was it fun?
KK - No! Not at all. I had to pretend I was so happy to fly, but on wires I was [demonstrates]upside down to express the wind. To smile it was so difficult, I didn't feel happy but I had to act like I was. It was physically difficult, it took hours.
FIJ - In the temple, you had to bow 3000 times, could you explain to a foreign audience what that's about?
KK - In Buddhism when someone desires something strongly they bow to Buddha 3000 times. when you wish for something desperately,
FIJ - Ah, I see. I couldn't work out whether it was an apology, or you were praying for something.
KK - Oh, It can also be an apology, it's a punishment, and a purification. It relieves stress, bad feelings, and sins. It's about forgiveness, all our feelings are encapsulated in this.

FIJ - So let's move onto Be My Guest, could you tell us a little bit about that?
KK - It's more about societal issues, that's the message of the film. In Korea we have non-contracted workers, and the film is about a worker like this. He is fired after a year and he decides to get his revenge on the CEO of the company, and his family. He follows them on their way to their family trip. He doesn't kill them but he punishes them by bits of their body off: ear, arm, legs, etc. The CEO represents conservatism. When you try your best there is nothing impossible he thinks. So he asks, did you try your best? No. Because if you tried your best you would have been Okay So the fired employee is very upset, and teases the family, showing them you can try hard but it is not always possible.
FIJ - It's quite a violent film? In one scene you had your head cut off. How did you feel watching that?
KK - Actually, it was very funny! Who can experience that i thought? My head was cut off!
FIJ - So Ashamed is a more serious film, whereas Be My Guest is a dark comedy. With films as dissimilar as these, is there a different atmosphere on set?
KK - Well, the genre does influence the atmosphere. But, I think it depends more on the director, the staff, other actors, and things. The atmosphere isn't really influenced that much by the genre.

FIJ - Which kind of style is better for you?
KK - For me, definitely Ashamed, I have more personal influence on the role? It's more my real ability.
FIJ - I wanted to ask for western audiences, We have this image of Korean films being very violent, OldBoy for example. With Ashamed we got to see a different side, what is Korean cinema about for you?
KK - For me, every culture has every kind of film there is. In Korea there are more extreme films, commercial films, and in between there are independent films. The same as anywhere in the world. I don't really see the differences so much.
FIJ - I guess so, it's just the films that tend to break through in the west are these extreme revenge movies. So, how do you choose films to work on?
KK - The main thing is the script. Although, sometimes I can choose without a script, if the director is great. If Kim Tae-Un asked me to work with him, I'd do it without looking at the script, and Yang Ik-Joon, too.
FIJ - So what is about those two that makes you want to work with them?
KK - Yang Ik-Joon I worked with him before on Breathless. It was a very good experience for me. He is a really nice person, and also a good director. I trust him, so I can work with him in good faith. Kim Tae-Yun is also a really nice person, and he makes really good movies.
FIJ - What Korean films could you recommend?
KK - Obviously Breathless. As I'm an actress, I want to recommend my films! My first film Jealousy is my Middle-Name. Also, my first film as an actress was a musical film, Ghost Theatre. Also any film by Kim Tae-Yun.

FIJ - Do you have any future projects line up?
KK - I have several projects coming up, that are perhaps a bit more challenging. I'm doing a self-video, it's going to be a documentary, I'm recording my experiences at this festival, too. I'm working with a video artist called Adrian Wong. He's very talented, I'm going to film with him. It's going to some experimental film festivals, galleries. It's going to be in London, maybe in the Tate.
The Japanese release dates for Ashamed and Be My Guest are still TBA but both films are will probably be on limited release in the upcoming months.

Email ThisBlogThis!Share to TwitterShare to FacebookShare to Pinterest
Labels: Interviews