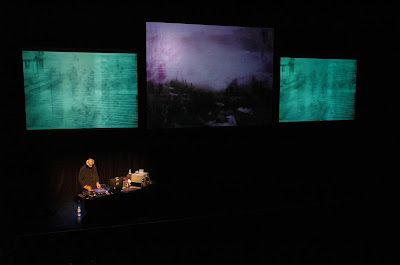 Paul D. Miller AKA DJ Spooky's film Rebirth of a Nation reinterprets D.W.Griffith's controversial, racist, revisionist, landmark 1915 film Birth of a Nation. The movie puts DJ culture in the director's chair seeking to show how history has a habit of recycling itself. In remixing Birth of a Nation it makes its own context. DJ Spooky created the score for the film , which is performed by the fabulous Kronos Quartet. Rebirth of a Nation has been screened at London's Tate Modern, New York's MoMa, and the Acropolis amongst others. It arrives in Hong Kong for its Asian premiere. There will be two performances on October 15th at the Hong Kong Arts Centre. Additionally, DJ Spooky will be doing a Master Class and DJ demonstration on the 14th. Tickets and information are available on the Hong Kong Arts Centre website. Get involved.

Email ThisBlogThis!Share to TwitterShare to FacebookShare to Pinterest
Labels: Interviews