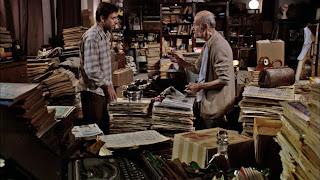 Director - Pelin Esmet
3/5
This Turkish film is interesting, if slightly slow, but buoyed by a great performance from its lead, a fanatical collector.
Against the background of a constantly changing landscape, symbolised by ever-present construction, this is the story of a great collector. Mithat, collects everything from rare encyclopedias of obscure history, to girly pin-up newspapers.He is a man who is desperately trying to anchor himself in the past, refusing to accept that new equates to better. His apartment is ceiling high with newspapers, he requires two of the same everyday. There is so much stuff, navigation is achieved through towers of junk lined pathways. His neighbours fear the collection is too heavy for the buildings structure to bear, to which Mithat freely quotes the city's legal limitations. Even seemingly unimportant bottles are part of the collection, as his unwitting nephew finds out when he callously pours himself a drink.
He is based on and played by the director Pelin Esmet's uncle, and is a great character. It is easy to understand why Esmet decided to base a film on him; incredibly stubborn, and absolutely resolute on his right to behave as he likes, no matter how much his neighbours, and the city council complain and gang up on him.
The janitor of Mithat's apartment, Ali, begins to help the old man with his collection. He does his errands, and is his proxy in the various battles with his neighbours. The neighbours are all desperate to have their apartment building refurbished and upgraded, as all surrounding buildings are, and constantly badger Mithat, and Ali to persuade him, to agree to up sticks for a renovation. Ali, sees his chance to move up the social ladder. Like Mithat, Ali is marginalized, from those around him, though in his case economically. He lives in the grotty building basement, an intercom call away from the demanding residents, and unable to spend time with his family. He begins to see in the vast collection, an opportunity to start saving up enough money to find a better job and be able to be with his family again. His is a strange part, despite his deceitfulness it is hard not to sympathize with him.
Mithat has clearly lived an interesting life. Some conversations he has recorded from his youth, which we become privy to, show he has travelled well and was not always quite so eccentric. To those around him though, apart from Ali and a middle-aged waitress at a cafe, he is an irritating, oddity; staunchly determined to stand in their way at every step. Their gaze is permanently rooted forwards, towards new swimming pools, gymnasiums, and the rising of their property prices.
The film could have been a little tighter. Like the stately Mithat himself, it refuses to rush itself, though at times the pace could have done with a bit of acceleration. But, maybe that is the point as his story is a fairly damning indictment of the speedy modernization of society around him, in which everything is in a state of flux and the past requires continuous upgrading. Mithat stares wistfully out of the window at the cranes and builders busying themselves around him, perhaps resentfully aware that these breaking tides will eventually wash his masterpiece, and the past, away.
Posted by Film In Japan at 4:35 AM