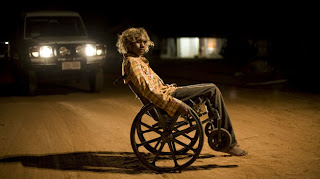 Exclusive Film in Japan Interview with the Director.

Samson and Delilah is a tough film that doesn't pull its punches. At times gut-wrenchingly difficult to watch, it pulls you deeper and deeper down, only offering faint glimmers of hope. As the Australian bid for the world cup kicks into gear, it shows an alternate side to the image being beamed to the world.
Samson lives in an Aboriginal community in the desert, detached and run-down. He is bored, frustrated and aimless. Delilah is caring for her sick grandmother. Samson decides that Delilah is the one for him, throwing stones at her to get attention and traipsing around after her like a lost dog, five steps behind. He forces his way into her heart, quickly dependent on her. She eventually warms to him and begrudgingly submits to the spark. Things take a turn for the worse though, Samson has pissed everyone off to the point where he is not safe, and Delilah is blamed for the death of her grandmother. They run away and head towards the nearest town, sleeping under a bridge and struggling to survive.
The main characters barely speak a word to each other throughout the film . This is partially explained by Samson's addiction to petrol-sniffing, which severely effects hearing. It's absence though, doesn't equate to a lack of communication between the two, and the film never feels quiet. The pair express themselves more than adequately through hand gestures, their eyes and body language. It is handled and acted in such a way that we are only ever faintly aware of it. Both Rowan McNamara and Marissa Gibson, Samson and Delilah, are non-professional actors and bring a innocence that sets the film up perfectly. Marissa, radiates warmth throughout the film. Despite only being 15 when filming, she has a maturity far beyond her years. Gonzo, played by Thornton's brother is another excellent performance. Singing and stumbling, he steals the show whenever he comes on screen.
The film identifies some of the tensions between the two neighbouring communities . A white Australian who runs the local shop in the community is ripping off the grandma and the daughter for the Aboriginal art they produce. He gives them 200 dollars a piece, but later in the film Delilah walks past a fashionable indigenous art gallery where the pricing is 20,000 dollars. It is an uncomfortable scene when, desperate for some money, she walks in bloodied and scarred carrying her painting, and the curator barely looking up from his glowing apple laptop, just to say, "not interested". Delilah is reduced to silently parading around her painting, a commodity. Whenever they are in the town there is a cloud of suspicion cast over them by the locals, and a disinterest in the back story as to why they have ended up there. They are outsiders in their own country, not welcome and not wanted.


Thornton looks inward as well. Delilah, who has been diligently caring for her grandmother, is battered by the elder ladies in the village as a focal point of their grief. It is horrifying to see a girl who was has been so kind and giving, being treated in such an utterly undeserving way. Samson's petrol addiction is for the main part of the film largely ignored or tolerated by those around him. He drifts around in a silent cloud, slowly rotting his brain. He is a lost cause to the community, it is only Delilah and her grandma that give him a chance.
Music is used expertly. At the start, we awake with Samson, in his dingy dark, hazy bedroom. He reaches around for a cut in half plastic bottle of petrol and takes a big hit. The irony of the country and western crooning of Sunshiny Day makes its point. Later as Samson dances to his wild rock music in the moonlight, Delilah sits in her car listening to a Mexican love song. The two characters, and their music, though polar oppositely different mix into each other and create something new, and Delilah's interest is sparked. It is a hypnotic scene.The village band, set up constantly, right outside Samson's window play the same riff, diligently practicing everyday but symbolic of the rut the community is in. In a film where dialogue is minimal these moments carry added significance.
As agonizing as it is at times, the film has a purity beneath the surface. It thankfully offers some level of redemption for those involved. A simple story of love, doused with painful reality, and a story for a community that has struggled to be heard. A hard journey to make but a rewarding one.